There’s one thing I want from a piece of art and that’s excitement.

I want to feel reverberating, unrestrained energy, not just glimpse it.  I want my eyes to gallivant all over the work, not just puddle in one place, if at all. And that’s exactly what Dynamism should do; it should portray strength and energy expressed through action and motion.  In terms of art history, it’s a fairly recent occurrence, although some ancient cave art clearly expresses it.

Dynamism’s a fascinating concept.  When the romance of portraying reality and perspective in art ebbed, the flood gates of creative expression opened wide and we revel in all the ‘isms’ such as Dadaism, Cubism, Surrealism, Expressionism, to name just a few, along with my all-time favourite, Futurism.

Their manifesto encompassed both an artistic and social movement in Italy in the early 20th century, which to some extent influenced other art movements and media including sculpture, ceramics, graphic design, industrial design, interior design, theatre, fashion, textiles, literature, music, architecture and even cooking.

And the Futurists produced some truly amazing work.  With titles such as ‘The Art of Noises’ by Russolo, ‘Abstract Speed + Sound’ by Balla and ‘Unique Forms of Continuity in Space’ by Boccioni, they were able to engage the viewer and carry them into a new reality – a visually tangible representation of force and energy.  Bravo.

The foundations of the Futurist movement were ruled by unrelenting speed, dynamism and simultaneity – this was their lifeblood.  Two great examples, both painted in 1912 by Giacomo Balla ‘Girl Running on a Balcony,’ and ‘The Dynamism of a Dog on a Leash,’ exemplifies this perfectly.

But, as nearly always happens when I research for these posts, I discover astonishing work by other artists that convey that essence of motion, and some are surprisingly gentle.  I’ll write more about them next week.

For now, just take a moment and enjoy my new Pinterest Board – Design: Dynamism, including examples of textile art from Jane Sassaman and Caryl Bryer Fallert, which fit this genre perfectly.

Now, as a self-directed learning project, I set myself the edifying task of employing dynamism into a new design. 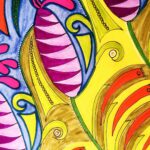 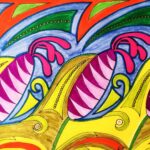 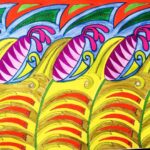 At left is the result.  There’s a definite feeling of motion, with the flower-heads and stems bending to cope with a never-ending, swirling wind, aided by a repeating motif.  I wish, however, I’d taken it further and exaggerated that feeling even more.  I’m not into gentle puffs, I want a hurricane!

There’s certainly room for further study and improvement, but I know I’m heading in the right direction.

And that’s what design’s all about – always challenging and always learning.