PROCESS – The Making of Vortex 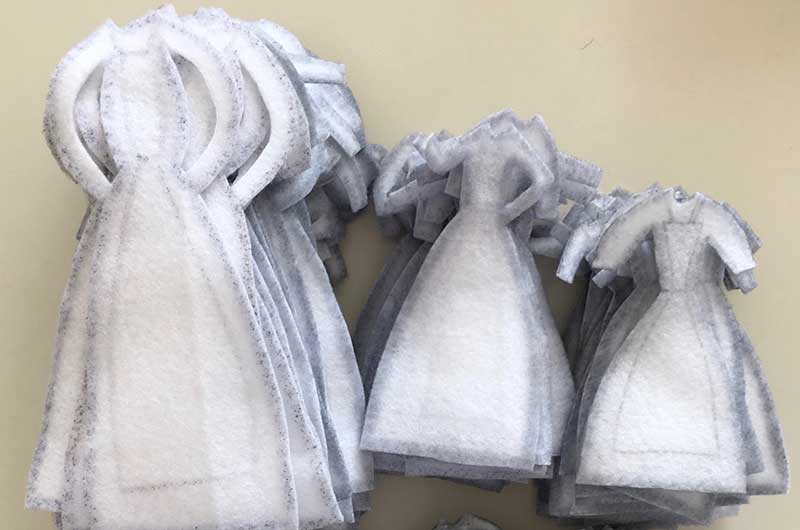 I love process. It’s what enables me to push through those difficult times during the design and making of a new work.

Join me as I work through my processes for my new work Vortex. This is part 1 of 3.

This work was an invitation from Anne Kempton from Timeless Textiles Gallery in Newcastle to be a part of an exhibition entitled ‘Stitched Up’ at the Lock Up Space next door to her gallery.

The theme was the Newcastle Industrial School 1867-1871. There was also a very limited colour palette.

Research was urgently needed as I knew nothing about this institution or the 193 girls who were housed and worked there.

Click here to learn more about the Newcastle Industrial School.

I imagined this work needed to be emotive, evocative, poignant, moving and even ethereal. This was my starting point.

Next was inspiration. I started a Pinterest board – click here to see it – where I used those words to gather ideas.

Dresses were an obvious choice as they unified the design yet by making 193 of them, represented each and every girl. I was thinking aged, grubby, fragile, delicate and worn.

The work of Japanese artist Chiharu Shiota was stunningly otherworldly and she used dresses in some of her pieces.

Originally I had planned for the work to be viewed from both sides, so began sampling using cut-out felt dresses trapped between white silk organza, then free machine stitched together. 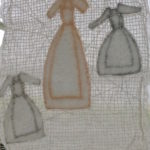 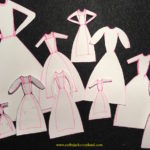 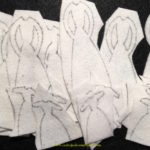 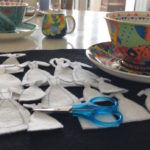 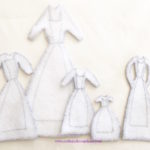 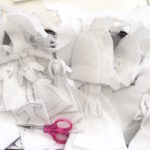 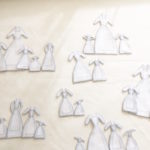 Laying them in groups 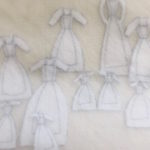 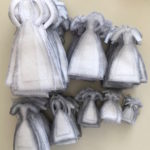 Shading around each dress using a grey marker

I varied the size of the dresses, not really knowing how the layout would be at this stage, but knowing it would make a stronger design. Some I gave sassy poses to, such as hands on hips or behind their backs. These girls had a hard life.

With all the dresses finally cut out, it was time to think layout. I tried them in groups, then spaced out, but it wasn’t working.

Fortunately I had a large piece of white cotton and began laying them from small to large. The idea of an endless circle just happened with the smallest in the middle, spiralling to the largest on the outside. This was totally different from my original concept, but it worked – I could see it. It was representational of those girls lives – out of control, but it was also very ethereal. These girls were floating evoking the very sense of those words I used as my starting point. 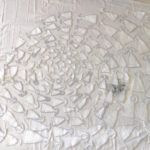 The beginning of my design for Vortex