‘Serendipity: the joyful coalescence of happenstance.  Grasp it while you can.’  Cathy Jack Coupland

Recently, we watched a stunning documentary about Mont St Michel, a tidal island in Normandy, France, now listed as a World Heritage site, attracting 3 million visitors annually.  It was used in the 6th and 7th centuries as a stronghold of Gallo-Roman culture, becoming a monastic establishment in the 8th century when St Michael is said to have appeared to the Bishop instructing him to build a church on the rocky islet.  How on earth they built such a towering edifice on that tiny handkerchief of rock is beyond me.  But, I’m so glad they did.

A few weeks later, while researching the Bayeux Tapestry, which is actually a narrative embroidery telling the story of the Norman conquest of England in 1066, what should appear but a direct reference to Mont St Michel?  It’s there, in the embroidery, boldly standing sentinel throughout the centuries, just like the medieval structure it emulates.  Seeing it there, stitched by the hands of unknown women, just made my heart sing. 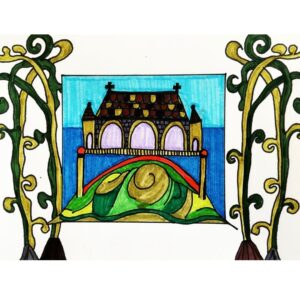 My interpretation of Mont St Michel as depicted in The Bayeux Tapestry along with trees used as story breaks.

‘When fate plants ideas in my lap, I run with them – quickly.’  Cathy Jack Coupland

Now I’m the sort of person with my feet firmly planted, believe me, but I also believe sometimes – just sometimes, there are harbingers, portents or forewarnings which can lead me in certain directions.  And I take note.

I’m slowly, slowly researching Alfred Lord Tennyson’s poem, The Lady of Shallot, set in mythical Camelot, with Lancelot, an evil spell, a beautiful maid – you get the drift.  It’s pure fantasy, but full of the most amazing imagery, and as soon as I saw Mont St Michel, there was my inspiration for Camelot.

So what I’m saying is, I believe in listening to or taking note of, these little signs, feelings and portends.  Perhaps it’s more about knowing where I’m heading, and the outcome I want to achieve, whatever, I believe these little auspices have some form of attached meaning.  It’s like a sign saying ‘Look at me, look at me.’

My mind is open to opportunities, whenever and wherever they might occur.  I hope I do them justice by making use of them.

Do you see road signs?  More importantly, do you take note?